For Children and Adults, with Interactive Participation of the Audience 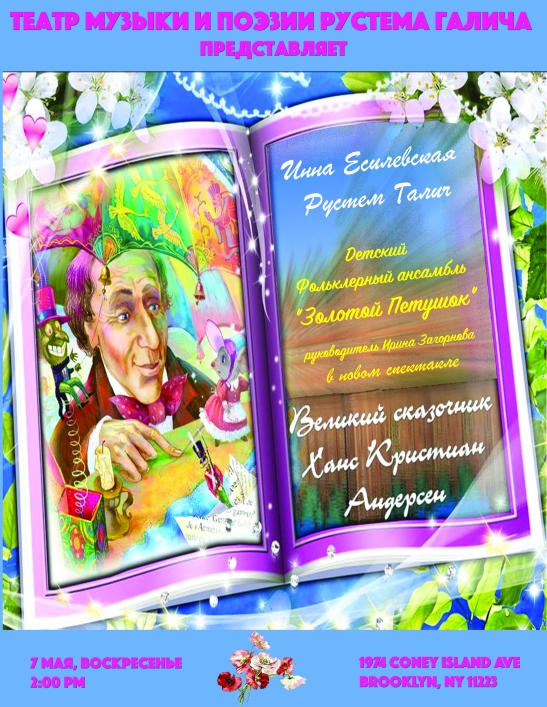 In a New Theatrical Production of

For Children and Adults, with Interactive Participation of the Audience

Andersen’s Fairy Tales are thought provoking and kind, wise and magical. They have taught us empathy and compassion and will remain with us. They will continue to guide and to bring joy to our children, grandchildren and their children, discovered anew with every generation. Thus, they always remain Fairy Tales of Deep Importance.

Children’s songs and nursery rhymes will be performed by “Golden Rooster”.

The audience will be encouraged to participate, play and engage with the show; at times invited to come up on the stage and perform alongside the actors. This participatory element will allow the audience to shape the production, not only as observers but also as collaborators.

The fairy tale acts as a window into the world, opening the reader up to its enchanted wisdom.

Anderson’s fairy tales are inhabited by living and non-living things—flowers and children share secrets with each other; dolls and toy soldiers run away in pursuit of love and happiness; trees and animals share the same language; houses, streets, shoes and umbrellas are infused with magical properties capable of turning time back or deciding human fate. Love is the dominating force in Anderson’s world.

Anderson used to say that fairy tales come to him. He said, “They are whispered to me by the trees, they are carried to me by the winds… I have so much to offer. Sometimes I feel that every fence, every little flower talks to me – Look at me, they say, and my life will open up to you!—and as soon as I realize it, I can tell a story about any of them.”

This theatrical production of “Great Storyteller” will give the children an opportunity to become the creators of their own unique world, to touch the knowledge of the philosophical essence of good and evil through play, fantasy and music.

Please join us and see the magic of the fairy tales come to life.

Tickets at the door

On the other hand, you can order the tickets by email: innaco@gmail.com

Rustem Galitch– graduated from the Schepkin Higher Theatre School (Moscow). He has directed and starred in the play “The Demon” based on the poem by M. Lermontov. Rustem founded a Theater of Poetry and Music and staged several plays with have had success in Europe and America. He had also performed in the productions of the Literary Theater Dialogue and have several productions at the Metropolitan Opera.

Inna Yesilevskaya – Graduated from The Kazan Theater School and has performed at the Ivanovo Regional Theater and Saratov Academic Theater in Russia.

Her stage credits in New York include seven seasons with Steps Theater. She is also an actor with the Literary Theater Dialogue. She has performed in various productions of the Haverim Theater and The Metropolitan Opera at Lincoln Center. Inna is a lead actor of the Rustem Galitch Theater of Poetry and Music.

The Golden Rooster is a Russian Children’s Folk Group founded in New York in 1995 by director Irina Zagornova. A native of Russia, Irina graduated from the Mussorgsky College of Music in St. Petersburg, where she studied folk singing and classical piano. Irina began the group as a way of preserving Russian folk traditions through a medley of singing, dancing, folk rituals, and musical games. Handmade folk costumes, lyrical love songs, and popular melodies make the group’s performances educational, original, and incredibly entertaining.

The Golden Rooster has regularly performed at the United Nations, the Russian Consulate in New York, the Russian Embassy in Washington D.C., and many other local and international venues. In addition, they represented America in the International Russian Folk Festival in Moscow in October 2007.