Fabergé Eggs: The Glory, the Mystery, the Magic

Exhibition and Sale of replicas of some of the most wondrous eggs ever created by the genius jewelers! 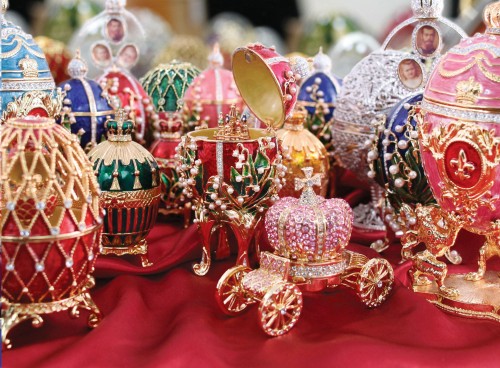 Saint-Petersburg Global Trade House, the leader in Eastern European imports of gifts, souvenirs, and home goods, is holding an exhibition and sale of its impressive collection of Fabergé Egg-inspired collection.

About the company:
Saint-Petersburg Global Trade House was founded in 1994 and is the largest retailer of products from Eastern Europe in North America. The company’s new Fifth Avenue store is now THE main destination for unique gifts throughout the year.

Originally opened to specialize in Russian books, movies, and music – products, aimed at the great numbers of Russian-speaking immigrants entering the United States, the company has grown to include the highest quality fine china from Imperial Porcelain Factory (becoming its exclusive North American distributor), Gzhel, Verbilki, and others in its product mix. Beyond that, the company’s extensive product assortment includes virtually every product Russia is known for, from hand-created lacquer boxes, to Fabergé style egg music and jewelry boxes, to matryoshka nesting dolls, to Khokhloma wooden tableware, to goat down, wool, and silk shawls and scarves from Pavlovsky Posad and Orenburg, to cookware, children’s toys and games, apparel, and more.

Saint-Petersburg Global Trade House is also known for a variety of cultural and charity events and evenings with Russian music stars and writers that have become a much cherished tradition. Now, Saint-Petersburg GTH has come to be known as an important cultural landmark of Russian New York and a meeting place for all admirers of Russian culture.

See for yourselves by visiting one of our stores:

Proud to be a part of the Russian-American History Month!