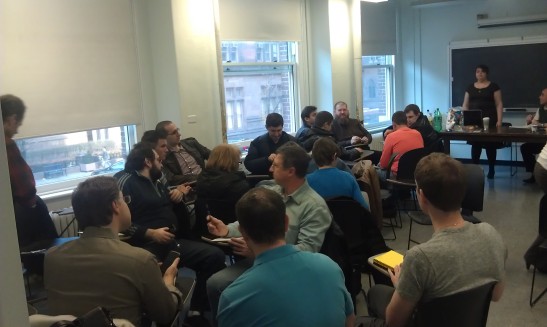 Chto? Gde? Kogda? (What? Where? When?) is a traditional intellectual game extremely popular in the Russian-speaking world, and will be held completely in Russian at Columbia University. This synchronous game will involve teams from all over the world competing to answer the same questions.

The Russian International Association of Columbia University (RIA) was created in 1998 in order to unify and educate the Columbia Community about the Russian language, culture, and the legacy of the Soviet and Post-Soviet regimes. Anyone, who shares a common background of growing up in the countries of the former Soviet Union, or who is simply interested in learning about the and literary traditions and the riches of culture of Russia and former states of the Soviet Union is welcome to join our association.

Our events include traditional Russian cultural activities, Russian movie screenings, having dinners featuring traditional Russian food, going to Russian plays, dancing to Russian music, and participating in Russian literary nights. Furthermore, our social events include ice-skating trips, study breaks, and sports events, such as volleyball games. We also invite prominent speakers to educate our community about literary and political issues of interest. Our events are aimed at bringing together people who are interested in the Russian culture, giving them a chance to learn more about our rich cultural heritage.